Liverpool legend-turned-pundit Michael Owen believes his former club still hold the advantage over Manchester City in the race for the Premier League crown. The Reds recently dropped a couple of points in the 0-0 derby draw against Everton and this has witnessed them relinquish the top position to the Citizens. 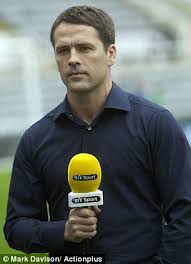 Still, Owen insists that the Reds have the advantage in the title pursuit, given they have gone through the tricky away games while they face the likes of Chelsea and Tottenham Hotspur in their home patch, he told Goal.com: "It looks like it’s a two-horse race. There’s only Manchester City and Liverpool that are potentially going to win the Premier League. “I’ll feel sorry for whoever doesn’t because in any other year the second team would’ve won the Premier League by maybe 10 points. This year has been an exceptional standard and it’s going to go a long way yet.

“Liverpool now have played in recent weeks Everton away, Manchester United away and okay“, their points have dropped a little bit, but now it changes. Now Manchester City have a more difficult finish. Liverpool have easier teams. All their difficult games are at Anfield against Chelsea and Tottenham."
Pep Guardiola’s team are yet to face Manchester United on the road this campaign and the derby could prove a tricky prospect for them. The Citizens have had the better of their Mancunian rivals over the past five years but there are no doubts that the Red Devils would do the utmost to deny them a second-“straight Premier League crown“.

Manchester City are currently one point ahead of Liverpool at the top of the table and they can extend the gap further when they entertain Watford at the Etihad Stadium on Saturday. Liverpool are scheduled to host Burnley during the same gameweek, but they don’t play until Sunday which provides the Citizens with the opportunity to put pressure on them.