Michael Owen has spoken about Premier League holders Manchester City and their transfer plans. It's not a secret that the England duo of Jack Grealish and Harry Kane were the top two transfer targets for the Citizens in the transfer market this summer. 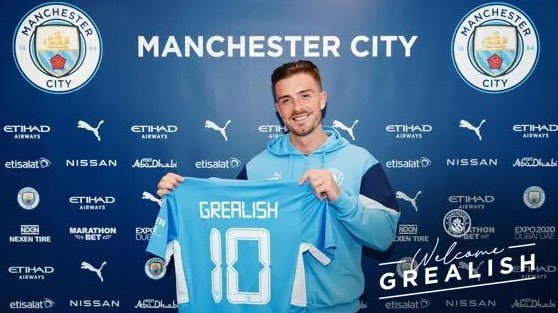 Kane and Grealish were together with the England national team over the summer. The two players were crucial to the team's run to the final of Euro 2020. England were just a penalty shootout away from ending many years of playing football at major tournaments without winning any trophy.

Liverpool legend Michael Owen talked about the Manchester City transfer plans on Twitter while responding to a tweet which said that the Citizens won't go after the other player if they get one of the two aforementioned players. According to Michael Owen, Manchester City will go after the two players in an attempt to add them to an already star studded team at the Etihad Stadium.

Manchester City have already broken the bank by signing England attacking midfielder Grealish from Aston Villa in a deal worth around £100m. The transfer made him the most expensive in the history of British football.

Grealish made his debut for Manchester City few days after signing for them. He came on as a second half substitute in the Community Shield which ended in defeat for him and his new teammates. Grealish played the final 26 minutes of the game decided by a late penalty from former Manchester City player Kelechi Iheanacho. Super Eagles of Nigeria player Iheanacho came off the bench to score the decisive goal after the foul from Dutch national team player Nathan Ake.

Manchester City have Grealish in the bag and that leaves them with Kane. The Spurs striker wants to leave the club for Manchester City as he claimed that there was a gentleman's agreement with chairman Daniel Levy. However, the Spurs supremo has not lowered his £150m asking price for Kane as he wants City to pay his valuation of the player.